St. Patrick Parish, located in Mauston, WI, has been an integral part of the community since 1857. The parish, now 550 families strong, is an established Catholic community in the Diocese of La Crosse that welcomes all. Parishioners engage in various parish and community events focused on faith and service. The parish has long encouraged the propagation of faith and education by its continued support of our Pre K – 8th grade school. 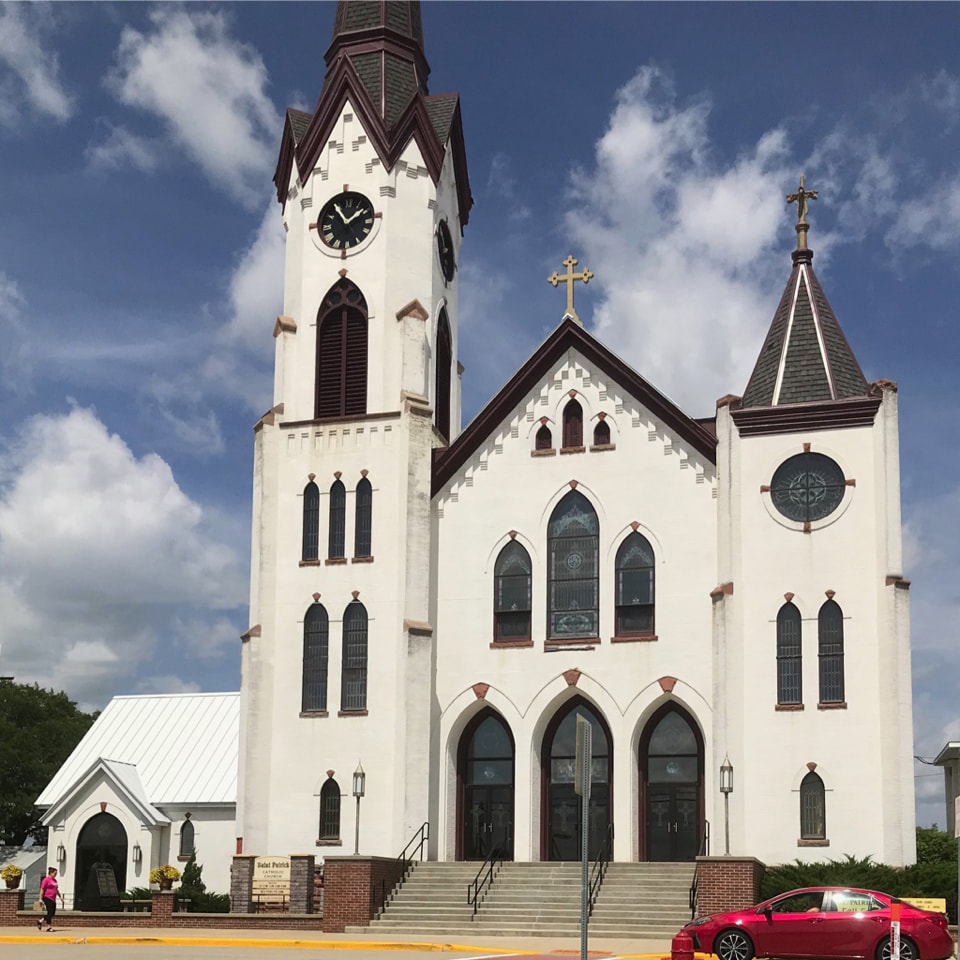 In 2017 St. Patrick celebrated its 160th year. During those years St. Patrick has enjoyed a rich history. There have been three churches, the first built on the east end of Mauston in 1857, the second, which burned in 1901 built on our current site and our present church built in 1901. The cost to build the church in 1901 was $29,425.

To 2001 we had been served by sixteen Pastors, the longest serving was Father George Schleicher (1910-1950), and twenty-five associate Pastors and Assistants. Two assistants, Rev. Paul Flad and Rev. Edward Hartung later became Pastors.

Since 2001 we have had six pastors, four of whom were international priests, Father Charles Nabwana from Africa, Father Cheriyan Thomas from India, Father G. Valentine Joseph from India and Father Antony Arokiyam, also from India. Our current Pastor is Father John Potaczek.

Our church has seen three major interior renovations, 1951 when the original ornate altars were removed, 1970 when the altar was moved to face the congregation and 1996 which saw a return to a more gothic look. The cost for the 1996 renovation was $730,000. The brick of the church, rectory, and school was painted white in 1951. Our last renovation gave us a large gathering area and an elevator which makes it possible for the handicapped to access all floors of our church.

The original rectory was located between the church and the school. When the new school was built in 1929, the rectory became the Sisters convent and a new rectory was built east of the church. The convent was moved to a new location in 1991. It now serves as housing for low-income families.

St. Patrick Church is very visible in our community. Each year for the past 25 years we have held a large Fall Festival whose success we owe in a large part to the support of the whole community.

The community is also responsible for the success of our Hunters Night Out, which supports our schools athletic program.

The Community Sharing Pantry got its beginning in a corner of Reardon Hall. We are very active in the Mauston Ministerial Association. We deliver Meals on Wheels to the home-bound two months of each year.

Our parish is blessed with volunteers who serve on its many committees. They give tirelessly of their time to make the decisions and to do the work necessary to make this parish great. There are also the many volunteers who work behind the scenes, and do it with a willing heart. In 2017 our parish numbers 550 families.

As we go forward, into our next 150 years, we know there will be changes. Just as our forefathers who made such sacrifices to provide us with this great church, today we, its current parishioners, will make sacrifices to keep it great for our children and beyond. It is an outward sign of our inward devotion to our Lord.